Shopping an airplane is pretty much the same as shopping a car. You urge for the most expensive, can affort only the cheapest, but end up buying something in between, using feelings more than common sense.

So it also ended up for me, by buying a used Jora UL from 1995. The aircraft have not passed 400 hours in the air yet, which means this is an aircraft which havent been flown much in its 15 years. The aircraft did come from Denmark, sold by the danish importer by Jora and taken to Norway by a Danish Organbuilder late in the 90's. 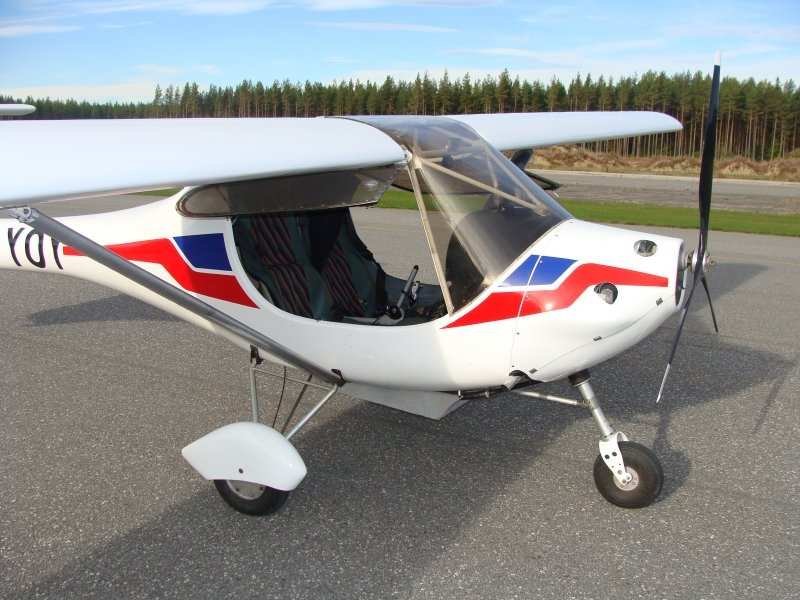 After a few years in Denmark, the plane was imported to Norway, and there have been five owners before me. The motor was from the factory a 503, but this was replaced to a Rotax 582 which now just have passed 150 hours. After inspecting the plan, it seems like a good purchase. It is resonably equipped with strobes, landing lights, heater and radio. It looks the buiness, and have an engine which is remarkably silent in my opinion. As all used aircrafts there are things to fix, as new seat covers and brakes. In my opinion she is a beautiful machine, which with a new flightwortyness attest also added to the decicion of buying her.

I have flown her with an instructor of Ringerike Ultralightclub (a very nice bunch of people down there, for the ones wondering to fly to Hønefoss) I took off, and flew approximately half an hour, landing her alone. Both takeoff and landing was not perfect, and was colored by the fact i have never flown the aircraft type earler. Flying Stratus as I normally do, makes you spoiled. In a Stratus you can play a game of Solitaire while you land it, since the plane are idiotproof. The Jora need more respect and attention, specially during landing.

The plane is quick, with a cruise around 80 mph on 70% effect. When we were flying we probably petrol and people for 220 kg, but she still managed easily 55mph on 4000 rpm. Alone in the plane, it seems probably that one can get 80 to 85 mphm which means a cruise for around 140 km/h within a fuel consumption one can live with. All this remains to find out when i start flying her. Previous owner did tell me that speeds up to 150 km/h was possible.

The aircraft was disassembled, wings and fuselage was loaded on a hanger. It was a Storm in Trøndelag at the same time, as it also is wise to have a little more than half an hour on a plane before taking her for a long flight home. So transport on car did go well, even if there was a bit of work keeping the straps tight and at the same time so loose the plane was not destroyed. The trip went well, even if it at times was rather windy.

The trip of 660 km went rather uneventful, no rain at all when driving. The nature did even this after coming home tho, with an incredible rainsorm so the house were shaking. The next day the plane was located in the hangar waiting for the new season. 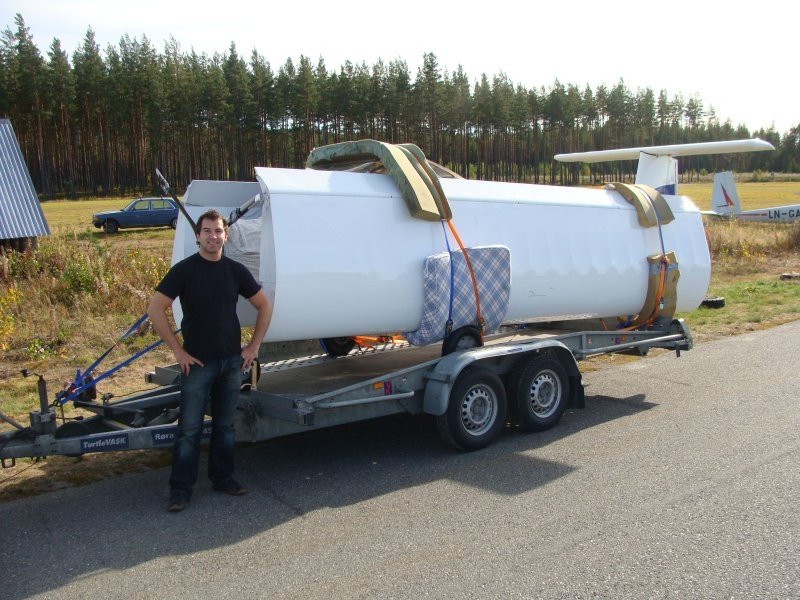 The picture to the left shows the previous owner Frode Bredesen with the Jora loaded on a car trailer. The drive home did have its share of wind and bumpy roads, and a little more stress than what was desired. But it is a bit like this, when one never is certain if the plane is securely fastened to the hanger. The trip itself was rather uneventful, and I had sun all over the Dovre mountain. But then the weather did change, and the storm which was going crazy outside Norway was rather feelable in plane and hanger. Nevertheless, she is awaiting sun and summer for a new season of flying now in the hangar.

UPDATE: the plane have undergone major service, and I am awaiting to get a check out before starting to fly it regularly.