Design of the Extra 300 was based on the Extra 230, an early 1980s monoplane having a wing made of wood. The Extra 300 has a welded steel tube fuselage covered in aluminium and fabric.

Pictures and my review of the model.


Extra 300 - 90cm wingspan.
Pictures and my review of the scratchbuild.

The build was very loosely based on these drawings: http://www.flyelectric.ukgateway.net/indoor.htm#extra
But since the plans is a sheet build, I did remake the plane to have boxed fuselage and proper wings. In very much a trial and error fashion. 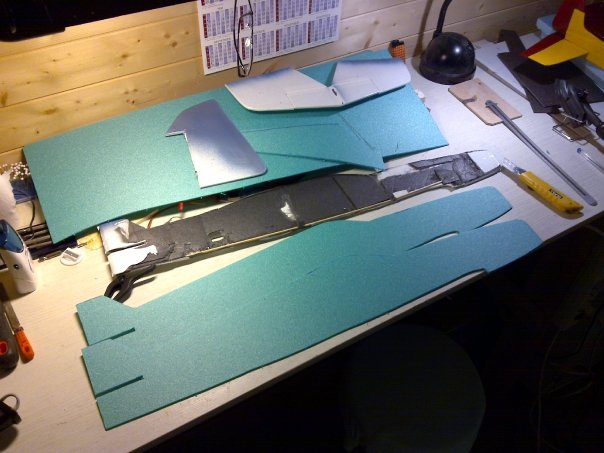 You can see the old black fuse side, along with the two new green sides. The old was used as pattern to maintain shape. The old and weaker box type build will be more a strong foam filled.

I adapted the plans to have a proper boxed fuselage and a profiled wing and what do you know... it actually flew very well. Initial trouble with cheap rx, and noisy servos was sorted out over time. Last trip I was looping and trick flying (with alternating control of the plane After moving the CG forward a bit from the initial setup, and the plane was excellent!

I flew it on a 3cell lipo and a Dualsky XM2826(46 gram), a Hitec SC RX and a Mystery 20A ESC. The plane has no landing gear, and the pilot (me) usually "lands" the plane a little to hard. It takes rough treatment perfectly tho, the fuse have survived 7 broken props and one broken servo and still flies!

It has become dented and is not so straight anymore, and with the last of many too hard landings the fuse was a gonner. It would probably be repairable, but I decided to make a new instead. Wing surfaces are still excellent, the plane just need a new fuse. I plan to make a solid foam fuse this time, and move the CG a bit forward too. 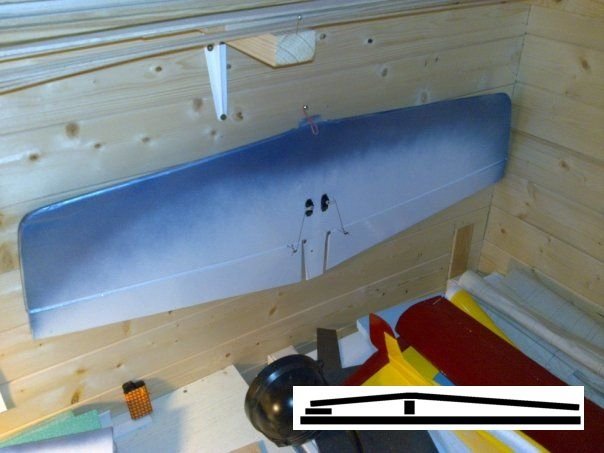 Wings are made of two sheets of 3mm depron with a pine stringer at CG, and a LE made of a center bit of depron, all sanded to shape and overed with oracover. Incredible strong and sturdy!

Darker coloring on the underside of the wing, so it should be easier to see against the sky. To the picture I have added the wing layout seen from the side. One sheet of depron under, one pine stringger at 1/3rd (CG) of wing, one sheet of depron rounded over the top and a center piece up front to make the LE.

The wing is then sanded to profile and covered with film.

Just in case someone wondered how the wing was sandwhiched together, there is a small illustration for it on the picture. 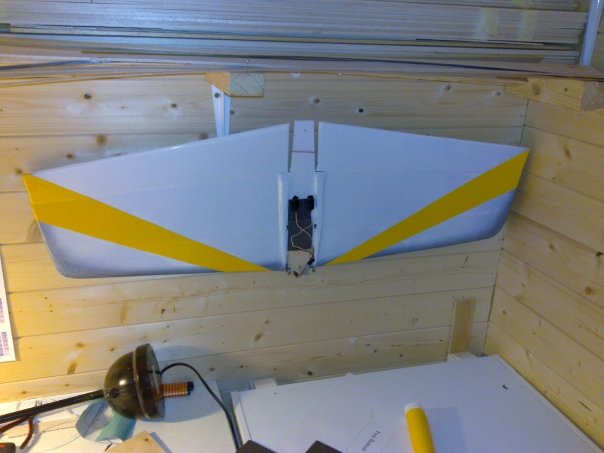 Stripes on top of wing so I can see which way is up and which way is forward from a distance. This can actually be rather difficult when the plane s 2-300 meters away up against a white cloudy sky. 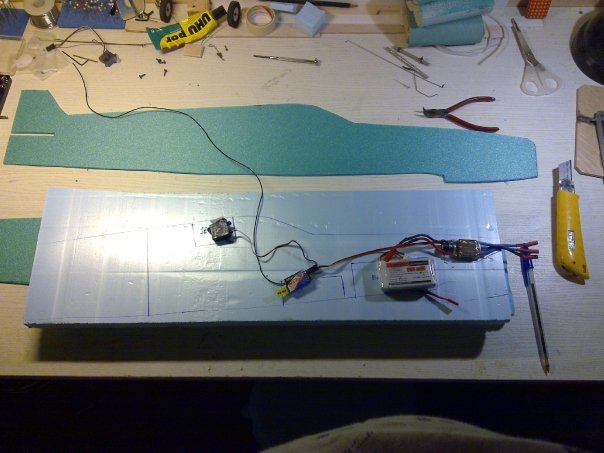 5 seconds worth of planning the hardware layout. I moved the battery forward 2 cm compared to the old fuse which was needed.

The blue DOW styrofoam is a little heavy, so using it comes with a little weight penalty. It is strong material and very usable for planes so it is ok. 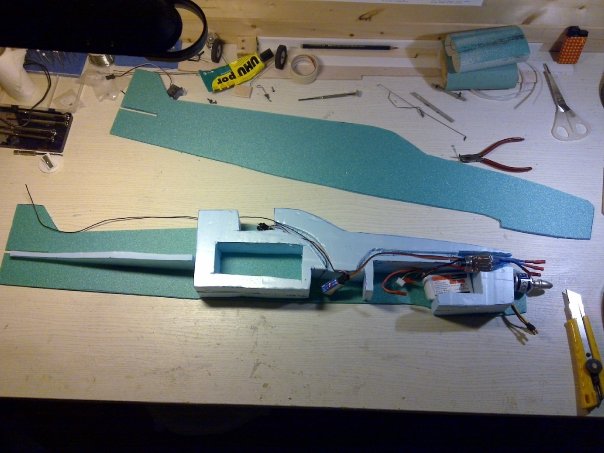 Center foam piece cutted and made. Hardware test fitted and it seems ok.

After cutting all parts I did a precheck on weights:

Means the total of the plane will be approx 350 gram ready to fly. The plane then is sturdy as a brick and will survive multiple crashes. 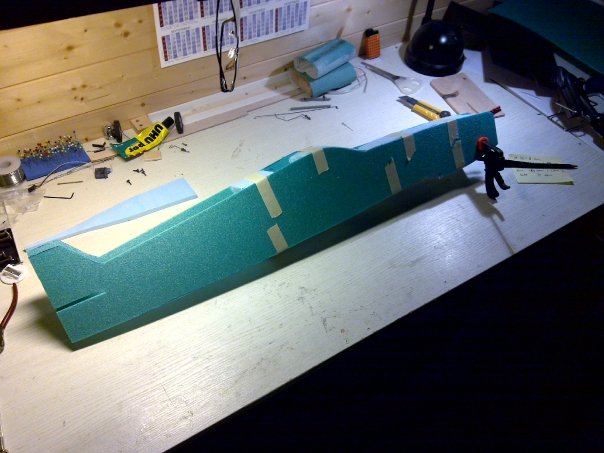 Using foam and depron is quick. Cutting parts takes litterally a couple of hours for the whole plane. Gluing it can take a while, most of which is waiting for the glue.
Covering with film is another couple of hours.

The fuse now will be made from 9 parts. Center foam I tried gluing with PVA glue (wood glue) having good experience using it on the DOW foam. Will be cool to see if the depron and PVA glue will be ok.

Usually I use UHU Por, but when it comes to big center blocks this takes a tube, so I tried an experiment using PVA istead. Building time... hmm well.. it is really possible to start from sheets making a flyable plane in a long day. 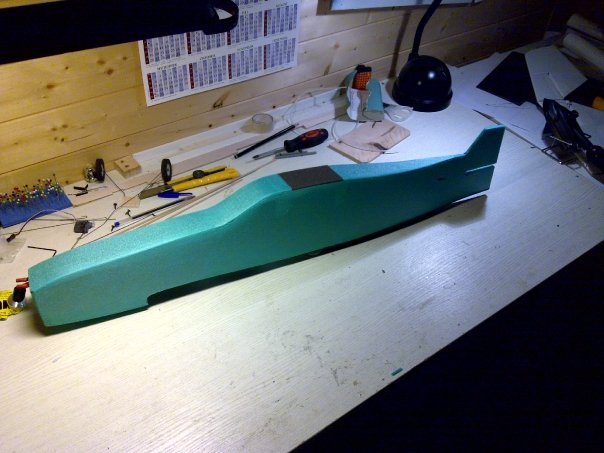 The wood pva glue worked excellent btw. It dries over night and creates an ok bond. I recommend to sand the surfaces to break the shine in them. I did not, but can see it will make the bond stronger.

The rest of the fuse is glued with UHU Por.

I have until now bought black depron, but the black was replaced with green the last time. Sad actually
The black one could be rolled without cracking in two... the green not at all.

If this makes a weaker plane, I am not sure. But it does surely make it not so easy to build.

If someone knows where one can buy black depron in 1.2 m2 sheets, please let me know.

Anyway, fuse looks ok and fits the wing. The black on the top is the servo hatch to gain access to fin and rudder servo. Aileron servoes are fixed to wing.

Double depron in the nose (6mm) and 3mm for the rest. Inside the rear part there is a piece of DOW foam to make the fuse straight and strong. 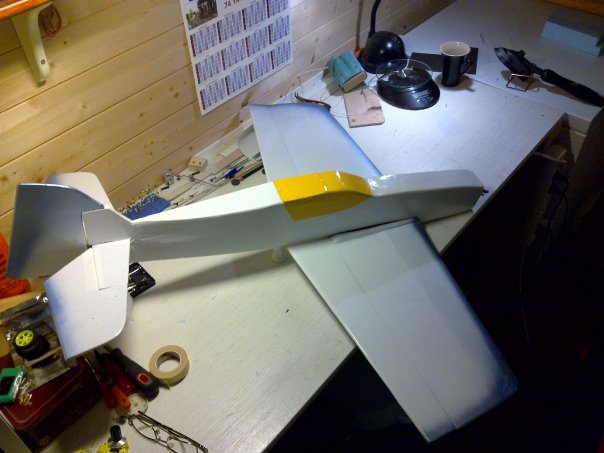 After adding film to the fuse, it ended up with no flexing at all. The film makes the difference but adds weight. 128 grams is the fuse with film compared to 102 gram without.

All in all, sort of happy with the build. Will have to figure out something to stiffen the tail. Had 4 layers (12mm) on the previous fuse, but it looked ugly. So we seems to be looking into some truss arrangement.

And total foam wheight of the fuse is 83 grams. With ESC mounted (easier to mount before gluing the sides) it is 102 grams 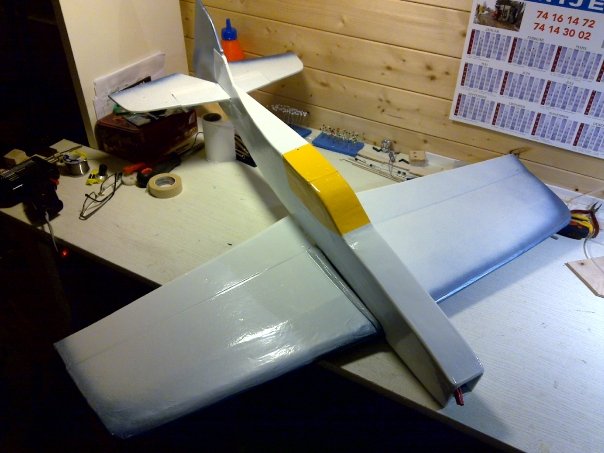 I like this plane. Short stubby wings with a lot of control surface makes it rather agile in the air.

For the initial launch (hand launch), I dialed in about 1 to 1.5 degrees of up elevator, just in case I needed to do a quick recover from a bad launch. However, in my case, she flew straight and true, and only needed minimal aileron trim (1 click)

With 1 degree of washout, the tip occasionally stalls if you insist on flying right at the stall point, but she quickly recovers.

The extra 300 has always been a beautiful plane, even as a foamie. Have a look at the real Extra 300 flying here.